In 1865, a Democrat shot and killed Abraham Lincoln, President of the United States.

In 1881, a left wing radical Democrat shot James Garfield, President of the United States – who later died from the wound.

In 1975, a left wing radical Democrat fired shots at Gerald Ford, President of the United States.

In 1983, a registered Democrat shot and wounded Ronald Reagan, President of the United States.

In 1984, James Hubert, a disgruntled Democrat, shot and killed 22 people in a McDonald’s restaurant.

In 1986, Patrick Sherrill, a disgruntled Democrat, shot and killed 15 people in an Oklahoma post office.

In 1990, James Pough, a disgruntled Democrat, shot and killed 10 people at a GMAC office.

In 1991, George Hennard, a disgruntled Democrat, shot and killed 23 people in a Luby’s cafeteria in Killeen, TX.

In 1995, James Daniel Simpson, a disgruntled Democrat, shot and killed 5 coworkers in a Texas laboratory.

In 1999, Larry Asbrook, a disgruntled Democrat, shot and killed 8 people at a church service.

In 2001, a left wing radical Democrat fired shots at the White House in a failed attempt to kill George W. Bush, President of the US.

In 2003, Douglas Williams, a disgruntled Democrat, shot and killed 7 people at a Lockheed Martin plant.

In 2011, a registered Democrat named James Holmes, went into a movie theater and shot and killed 12 people.

In 2012, Andrew Engeldinger, a disgruntled Democrat, shot and killed 7 people in Minneapolis.

In 2013, a registered Democrat named Adam Lanza, shot and killed 26 people in a school in Newtown, CT.

Clearly, there is a problem with Democrats and guns.

Not one NRA member, Tea Party member, or Republican conservative was involved in any of these shootings and murders.

It should be illegal for Democrats to own guns.

Shooting accurately requires physical, mental, and physical/mental intersection skills. All of these skills decay, or perhaps the better word is atrophy, if they’re not maintained.

“I want to make this super obvious point,” Loesch said. “The government has proven that they cannot keep you safe. And yet, some people want all of us to disarm. You heard that town hall last night. They cheered the confiscation of firearms. And it was over 5,000 people.”

thepholosopher (56) in anarchy • 3 months ago 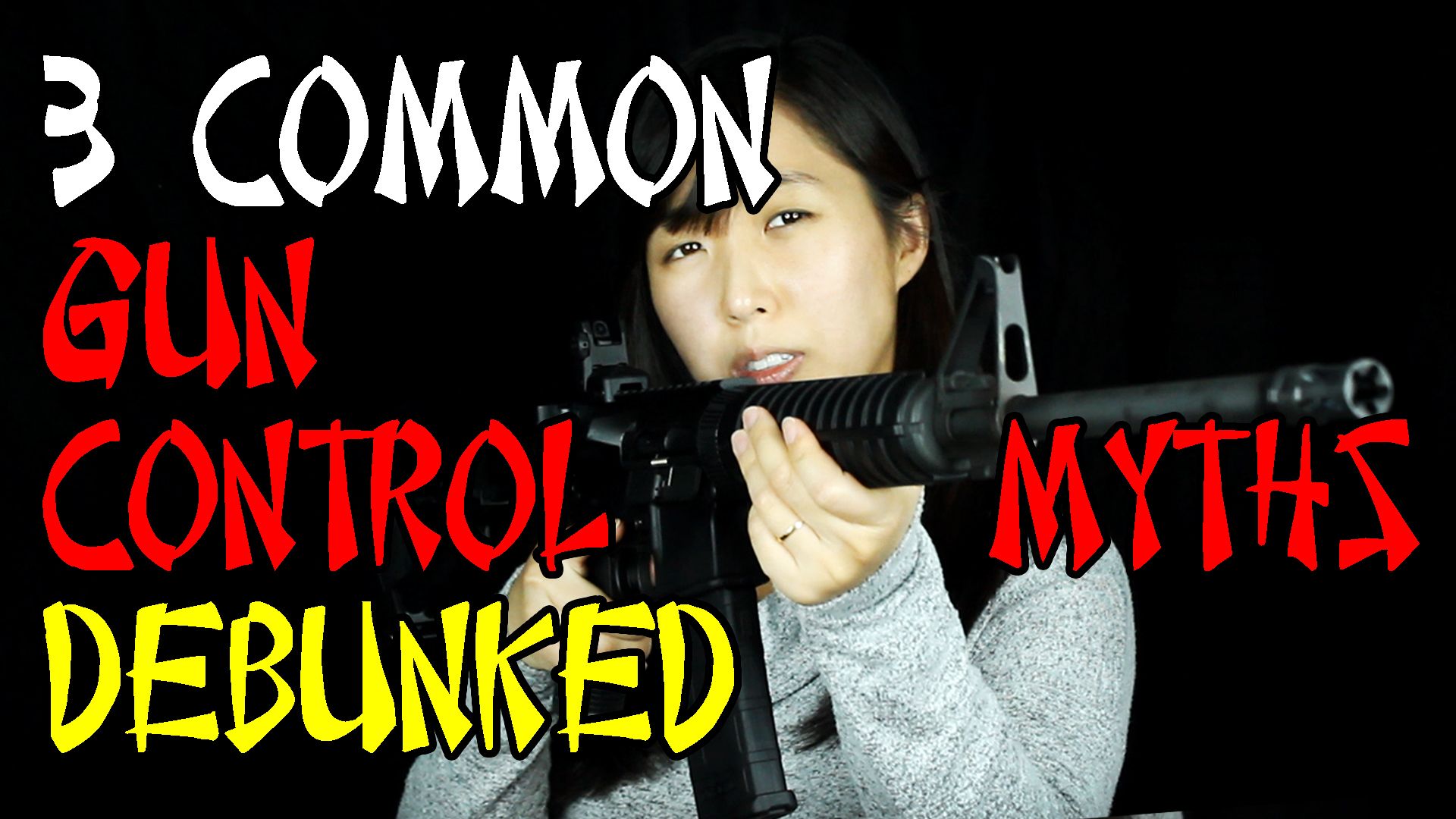 Number 3: “Gun Bans Are Effective in Other Countries.”

When gun control is argued, many try to bring up examples in other countries to suggest that gun control necessarily brings down the crime rate. The problem with this argument is that when people compare countries, they do not compare them proportionately, but instead, frame the situation in a manner that deceives others as to causation.

For example, one of the most commonly referred to countries is Australia as Australia enacted a uniform approach to firearms regulation at the federal level, applying bans across all territories with the Firearms Act of 1996. This act, along with other acts and regulations, essentially banned most firearms for private possession and required those who still had firearms such as simple shotguns and rifles to pass a screening and a waiting period. Self-defense with guns was also essentially banned with this act as the possession of a firearm for self-defense purposes is reason for denial of an Australian firearms permit.

Australia’s denial of the individual right to guns and self-defense might appear at first to be something remarkable as their homicide rate declined to 1 in 100,000 in 2017. However, this statistical significance is diminished when put into context for comparison.

First, Australia’s violent crime rate was already on the decline, with a firearm declination of 3% annually for years before the ban, meaning that other factors were influencing the change.

To make an apt comparison for questioning the efficacy of gun control, one must consider that Australia has a smaller total population and uniform federal gun law restrictions, unlike the 50 states. To make a proper analysis, one should compare the states in the U.S. with the most gun freedom with Australia’s population.
If one counts the population in America’s most pro-gun states up to Australian population count, and then compares the homicide rate, a clarity will emerge that demonstrates a negligible difference.

With this in mind, it should be clear why the mainstream media frames nationwide comparisons to make it appear that gun control laws are the magic bullet to stopping homicides: they don’t want to look carefully at the states with more gun freedom.

For further understanding in comparing Australia’s gun laws to the U.S., look at the states in the U.S. with the most gun control: New York, New Jersey, Massachusetts, Illinois, California, and Rhode Island. Taken together, these states have an average of 3.78 homicides per 100,000 people. From this information, we can infer that gun control laws are not themselves the core attribute that makes murder rates go up or down.

Rather, what we see is that dense populations afflicted by localities that prohibit gun ownership and self-defense can be a possible factor in the equation.

And, looking closer to localities, this holds true when narrowing in where the higher murder rates are coming from.
In 2014, the Crime Prevention Research Center reported that just 1% of the counties in the United States with 19% of the population held 37% of the murders. In fact, half of the murders in the U.S. came from only 2% of counties, and these counties are in localities with some of the greatest gun restrictions like in Los Angeles, Washington D.C., and Chicago.

By this information, the homicide rate is more closely correlated with urban clustering and with gun and self-defense bans by those urban localities.

So, when people try to compare the whole of the United States to other countries, remind them to not compare apples and oranges.

Number Two: “Homicide Can Be Stopped by Banning Assault Rifles.”

People often try to suggest that a certain type of gun should be banned because it seems scary without looking at other types of accepted harms. For example, many try to suggest that certain guns that are black and have scopes should be banned because they can shoot a lot of people. These guns are often incorrectly labelled as “assault rifles,” when they are just semi-automatic rifles. “Assault” means selective-fire with the ability to go automatic, and automatics have been generally illegal to make and purchase in the U.S. since 1986.

So people often argue to ban semi-automatic rifles in the Armalite Rifle style, AR for short, without any meaningful analysis as to what guns are used for crime. According to the FBI’s statistics, handguns are used for murder some 8,000 times per year while rifles are used in less than 300 instances. In other words, rifles are used only 3 percent the amount of times handguns are used. The FBI’s classification of “rifle” doesn’t differentiate between an AR-styled rifle and a brown hunting rifle, so it’s likely that the percent is even lower in reality for AR-styled rifles.

Even clubs, hammers, and body parts are used more often for murders than rifles, with blunt objects totaling 428 murders in 2013 and hands and feet used 687 times.

So when looking at what people are arguing to ban, one ought to consider the fact that there are far more weapons that can be used to murder than rifles, and banning rifles will not stop people being murdered through other instrumentalities.

Some try to say that the second amendment doesn’t apply to individuals owning modern guns because the founding fathers didn’t foresee it. Hypocritically, these same people argue this using their freedom of speech via the internet, which also didn’t exist at America’s founding.

The reality is that the second amendment was always about the individual right of self-defense, which has already been settled case law from the United States Supreme Court Cases of D.C. versus Heller and from McDonald versus Chicago.
Justice Scalia noted about the second Amendment in Heller that: “It was clearly an individual right, having nothing whatever to do with service in a militia…on the basis of both text and history, that the Second Amendment conferred an individual right to keep and bear arms.”

Justice Alito noted in the McDonald case that gun rights were fundamentally about resisting government, saying:

“As we noted in Heller, King George III’s attempt to disarm the colonists in the 1760’s and 1770’s provoked polemical reactions by Americans invoking their rights as Englishmen to keep and bear arms.

This understanding persisted in the years immediately following the ratification of the Bill of Rights. In addition to the four States that had adopted Second Amendment analogues before ratification, nine more States adopted state constitutional provisions protecting an individual right to keep and bear arms between 1789 and 1820.

Unless considerations of stare decisis counsel otherwise, a provision of the Bill of Rights that protects a right that is fundamental from an American perspective applies equally to the Federal Government and the States. We therefore hold that the Due Process Clause of the Fourteenth Amendment incorporates the Second Amendment right recognized in Heller.”

With this in mind, it is important to see that the right to keep and bear arms is a fundamental human right, one that must be held first and foremost as a defense against government. As the right to bear arms must be maintained with the ability to resist government, military grade weapons cannot be peremptorily kept out of the hands of individuals as it is violative of their fundamental rights.

The reason Colt made his first pistol, was because he was bullied. He wanted to allow the weaker smaller man, have a chance against the larger tougher one. When his first pistol was successfully made, he called it the Equalizer. So that no person, big or small, will be at an advantage. The gun gun was made not just for war, but for self defense. You can not tell me that an assault rifle is not a warranted weapon when you get attacked by gangs, I have been attacked on a few occasions for being in “their turf”. Had I had a way to defend against so many attackers, I would have taken the opportunity. The only reason I am still alive today, is because some passerbys called the cops and they actually got there in time. That is not always the case. What good are gangs, when everyone around them is armed? They lose all the power we give them by doing nothing.

Let’s get our terminology straightened out first, because this is a problem with the discussion and for misinformed politicians…….automatic weapons required an FFL Class 3 license. I know because I sign off on those permits. Automatic weapons are machine guns, whether magazine or belt feed. You are really talking about semi-automatic firearms in which the operating system is cycled by gas. What is the difference between a semi-auto rifle or a semi-auto shotgun…..other than the caliber, nothing. So we ban semi-auto everything, including semi-auto pistols? Where does it stop and who gets to make that decision? The word “Arms” in the 2nd Amendment is any tool for the use of self-defense or business. I have a ranch and jack rabbit control is necessary to keep them off my fields to reduce hay loss for my livestock. I need a semi-automatic rifle, so who gets to decide on that tool? Living in the big city back east, you seemed to have lost your Western values……lol

This is a text widget. The Text Widget allows you to add text or HTML to your sidebar. You can use a text widget to display text, links, images, HTML, or a combination of these. Edit them in the Widget section of the Customizer.
Lethalfire
Blog at WordPress.com.